Binary Search is an algorithm that finds the position of a target value in a sorted list. The algorithm exploits the fact that the list is sorted, and is devised such that is does not have to even look at all the n elements, to decide if a value is present or not. In the worst case, the algorithm checks the log(n) number of elements to make the decision.

Things become more interesting when we have to perform an iterative binary search on k lists in which we find the target value in each of the k lists independently. The problem statement could be formally defined as

Given k lists of n sorted integers each, and a target value x, return the position of the smallest value greater than or equal to x in each of the k lists. Preprocessing of the list is allowed before answering the queries.

The expected output of this iterative search is the position of the smallest value greater than or equal to x in each of the k lists. This is a classical Binary Search problem and hence in this approach, we fire k binary searches on k lists for the target value x and collect the positions. 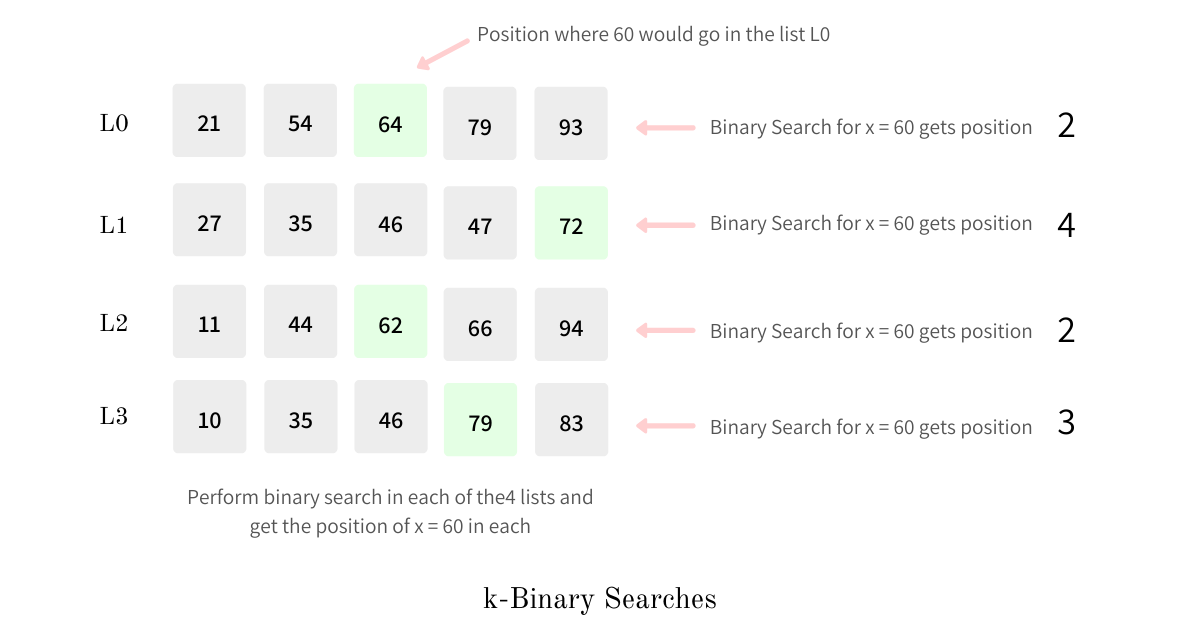 This approach does not really require any additional space and hence the space complexity is O(1).

The k-binary searches approach is thus super-efficient on space but not so much on time. Hence by trading some space, we could reap some benefits on time, and on this exact principle, the unified binary search approach is based.

This approach uses some extra space, preprocessing and computations to reduce search time. The preprocessing actually involves precomputing the positions of all elements in all the k lists. This precomputation enables us to perform just one binary search and get the required precalculated positions in one go.

The preprocessing is done in two phases; in the first phase, we compute a position tuple for each element and associate it with the same. In phase two of preprocessing, we create an auxiliary list containing all the elements of all the lists, on which we then perform a binary search for the given target value.

Computing position tuple for each element

Position tuple is a k item tuple where every ith item denotes the position of the associated element in the ith list. We compute this tuple by performing a binary search on all the k lists treating the element as the target value.

Given a 2-dimensional array arr we compute the position tuple for an element (i, j) by performing a binary search on all k lists as shown in python code below

Once we have all the position tuples and they are well associated with the corresponding elements, we create an auxiliary list of size k * n that holds all the elements from all the k lists. This auxiliary list is again kept sorted so that we could perform a binary search on it.

Given a target value, we perform a binary search in the above auxiliary list and get the smallest element greater than or equal to this target value. Once we get the element, we now get the associated position tuple. This position tuple is precisely the position of the target element in all the k lists. Thus by performing one binary search in this huge list, we are able to get the required positions. 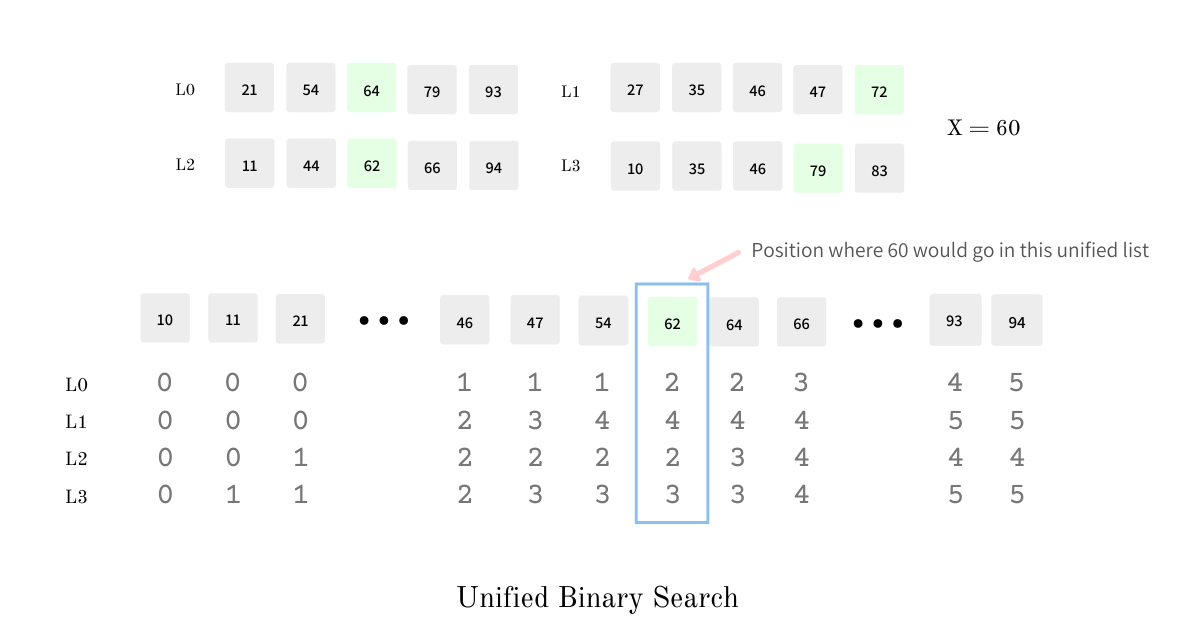 We are performing binary search just once on the list of size k * n hence, the time complexity of this approach is O(log(kn)) which is a huge improvement over the k-binary searches approach where it was O(klog(n)).

This approach, unlike k-binary searches, requires an additional space of O(k.kn) since each element holds k item position tuple and there are in all k * n elements.

Fractional cascading is something that gives us the best of both worlds by creating bridges between the lists and narrowing the scope of binary searches on subsequent iterations. Let's find out how.

Fractional cascading is a technique through which we speed up the iterative binary searches by creating bridges between the lists. The main idea behind this approach is to dampen the need to perform binary searches on subsequent lists after performing the search on one.

In the k-binary searches approach, we solved the problem by performing k binary searches on k lists. If, after the binary search on the first list, we would have known a range within which the target value was present in the 2nd list, we would have limited our search within that subset which helps us save a bunch of computation time. The bridges, defined above, provides us with a shortcut to reach the subset of the other list where that target value would be present. 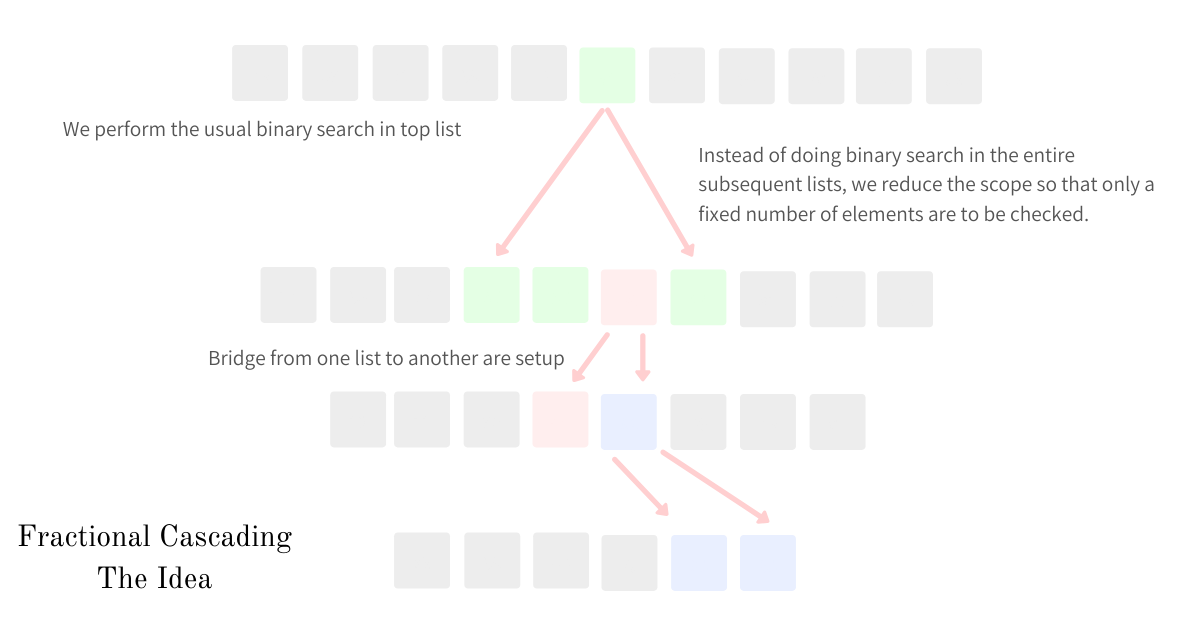 Fractional cascading is just an idea through which we could speed up binary searches, implementations vary with respect to the underlying data. The bridges could be implemented using pointers, graphs, or array indexes.

Preprocessing is a super-critical step in fractional cascading because it is responsible for speeding up the iterative binary searches. Preprocessing actually sets up all the bridges from all the elements from one list to the range of items in the lower list where the element could be found. These bridges then cascade to all the lists on the lower levels. 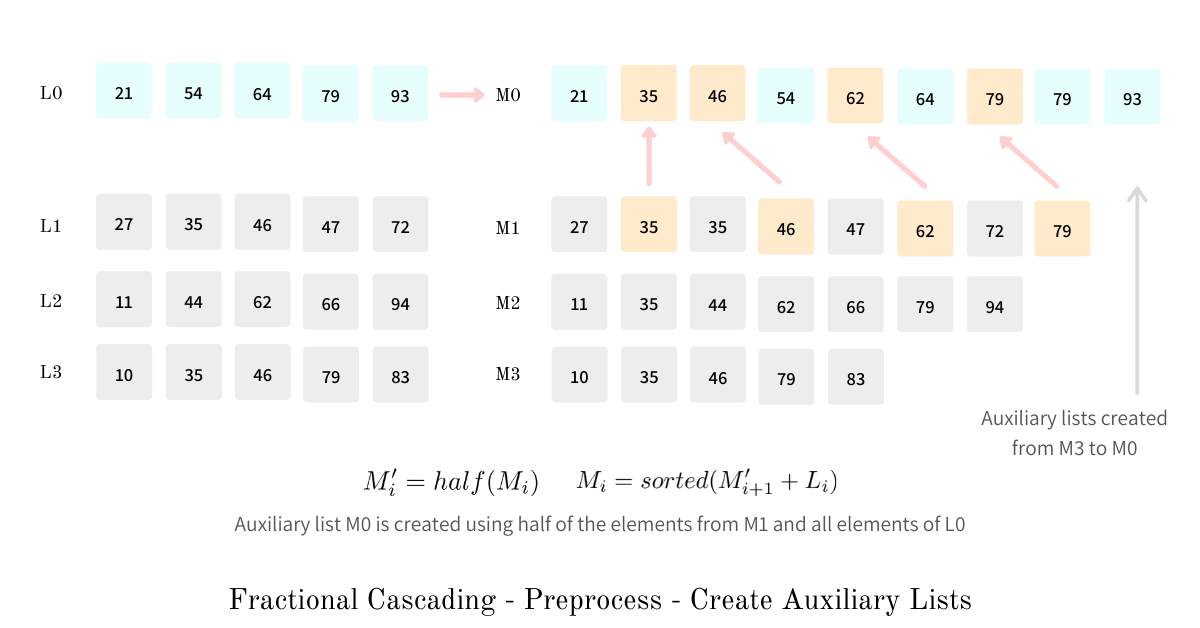 By picking every other element from lower-level lists, we fill the gaps in value ranges in the original list L(i), giving us a uniform spread of values across all auxiliary lists. Another advantage of picking every other element is that we eradicate the need for performing binary searches on subsequent lists altogether. Now we only need to perform a binary search for list M(0) and for every other list, we only need to check the element we reach via the bridge and an element before that - a constant time comparison. 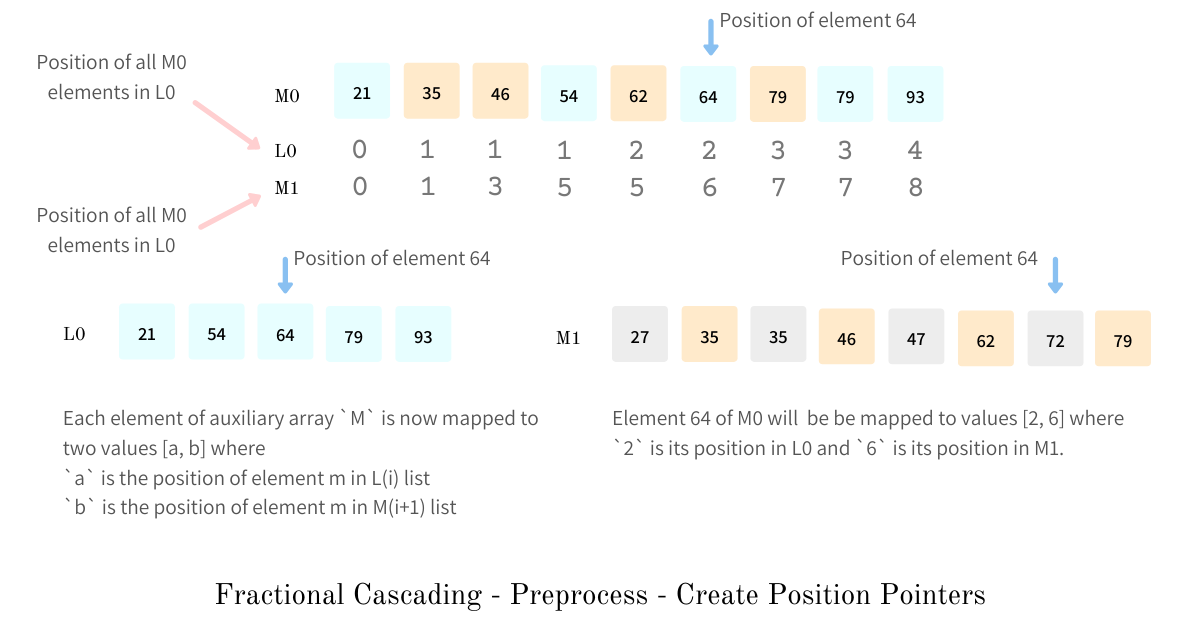 Since auxiliary lists have uniform range spread, because of every other element being promoted, we are sure that the target value should be checked again at the index b and b - 1; because if the value was any lower it would have been promoted and bridged to other value and hence the trail we trace would be different from what we are tracing now.

Once we know which of the b and b-1 index to pick (depending on the values at the index and the target value) we add the first item of the position tuple to the solution set and move the auxiliary list on the lower level and the entire process continues.

Once we reach the last auxiliary list and process the position tuple there and pick the element, our solution set contains the required positions and we can stop the iteration.

The entire working code could be found here github.com/arpitbbhayani/fractional-cascading

In Fractional Cascading, we perform binary search once on the auxiliary list M(0) and then make k constant comparisons for each of the subsequent levels; hence the time complexity is O(k + log(n)).

Fractional Cascading is used in FD-Trees which are used in databases to address the asymmetry of read-write speeds in tree indexing on the flash disk. Fractional cascading is typically used in range search data structures like Segment Trees to speed up lookups and filters.